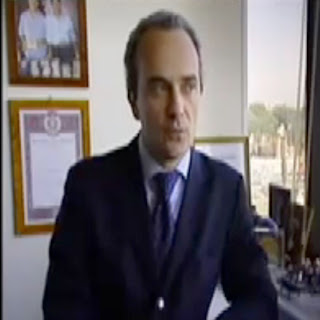 “Sin creates an inclination to sin; it engenders vice by repetition of the same acts.”

We've talked about the scientific "trees," DNA, Luminol, and the rest. Now let's take a step back and look at the forest of the Knox/Sollecito prosecution. Although science can exist in a perfect void of human issues, the science in this case is shrouded in a forest of human intrigue that cannot be ignored. A strange, dark, and twisted forest, it is.

Pride
The ordeal of prison and trial has gone on for nearly two years. Yet the real decision was made just a few days after the murder of Meredith Kercher. Head investigator Edgardo Giobbi determined, in his mind, the guilt of Amanda Knox and Raffaele Sollecito before he had even begun to acquire, let alone analyze any actual evidence.

He boasted of the feat on film. “We were able to establish guilt by closely observing the suspect's psychological and behavioral reactions during the interrogations. We don't need to rely on other kinds of investigation as this method has enabled us to get to the guilty parties in a very quick time." This was achieved before he even heard of Rudy Guede. In fact, just hours after the murder, when he handed Amanda a pair of shoe covers, "As she put them on she swiveled her hips... my suspicions against her were raised.”

Of course, these same investigators were confused by the meaning of Amanda's enigmatic text message to Patrick Lumumba, “See you later.” They thought it meant something like, “Let's meet later tonight and commit a senseless, horrific crime.” But despite this cluelessness, or perhaps because of it, deep psychological insight enabled them to perceive guilt in the complete absence of evidence. It might be called, a “thought crime” if you will. 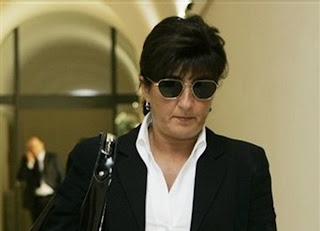 That is why, nearly two years later, even though there is still no evidence against Amanda and Raffaele, these investigators continue to fight for convictions. Their minds are made up, and they are not to be confused by mere facts.

That was the original Sin of the this murder investigation. The Sin of Pride, excessive belief in one's own abilities.

All of that, and a coincidence of date, the day after Halloween, along with a helpful suggestion from a blogger who channels a dead person to reveal a Satan worshipping Masonic sex cult (I'm not making this up) was enough for Mignini. In his pious mind, he envisioned the same lurid evil he had confronted before, in the Monster of Florence case. With much the same result, another tremendous injustice, perpetrated by Mignini himself.

That was the second deadly Sin of this investigation. The sin of Lust, an unnatural obsession with carnal desire.

Wrath
In the interrogation of Amanda Knox, the result was preordained, the only question was how long would it take, how much pressure it would require, to put the words into her mouth to seal her fate. No matter how many times Amanda said she didn't know, that she had no idea who had done this thing, they told her that she did, and that she'd spend 30 years in prison if she didn't say what they wanted her to say. Day after day they brought her in. Forty some hours without a lawyer, without a good night's sleep, without an interpreter, interrogating her in a language she barely knew. How long would you hold up?

They asked her to envision the murder, asked her to picture it in her mind. They brought Patrick into it. Why, she had sent him that incriminating text message, “See you later.” They told her that Raffaele no longer supported her when she said that she was with him that night. Suspects must always tell the truth, over and over again, without fail or variation. Interrogators are under no such restrictions.

And so she broke, and told them what they were demanding to hear. As soon as she possibly could, she wrote that while she had said such things, they weren't to be relied upon, “But I've said this many times so as to make myself clear: these things seem unreal to me, like a dream...” But, for the prosecutors, hey, close enough. They had her cold. The press forever after has called this her “confession” or “false confession.” More on the press in a future article.

What she really said in the middle of the night, what really happened, what coercion occurred, we may never know, because the prosecution will not release the recordings.

And so they committed the third Sin, Wrath, the emotion of the falsely righteous” “which can manifest as vehement denial of the truth.”

Hoarding
Witholding evidence from the defense has been a powerful, ongoing tactic of the prosecution. You can't refute the data if you can't analyze it. You can't analyze the data if you don't have it. The prosecution was finally forced by the judges to release information they had previously withheld on July 30, 2009, more than a year and a half after it was gathered. But their hoarding continues. Several critical pieces of information remain under wraps. These include:

These, and other acts comprise the fourth Sin , Greed, or Hoarding of materials or objects, by means of trickery, or manipulation of authority.

1. There have been many failures in the forensic effort. Three out of four critically important computer hard drives were destroyed by the Polizei “computer experts,” Amanda's, Meredith's, and one of Raffaele's. The remaining critical computer drive, Raffaele's laptop, was merely altered by being used by the police to surf the net, destroying evidence that could have proved Raffaele and Amanda's alibi.

2. When a murder victim is found a, measurement of body temperature and room temperature is a fundamental procedure as a means of indicating time of death. These measurements need to be taken as soon as possible for the most accurate information. Every competent investigator knows this. Meredith's temperature was not measured until 1:00 AM the day after her body was found, more than 48 hours after her death and far too long to provide meaningful information.

Professor Giancarlo Umani Ronchi:"We were asked to determine time of death," he explains, "but they had already made outrageous mistakes." "First, the failure to analyze the corpse by the coroner who arrived first at the scene."

3. A surveillance camera at a bank across the street from the apartment recorded all activity on the street, and would have seen the perpetrator coming and going. Unfortunately, the Polizei didn't get around to accessing it until the recordings had been overwritten.

By these and many other actions, the Polizei have committed the Sin of Sloth, the avoidance of work.

Envy
Patrizia Stefanoni had neither the proper equipment nor the proper laboratory to perform low copy number DNA profiling, but she did it anyway. There are only a few such laboratories in the world, as it is a very new, as yet unproven technique. Her own lab was not even certified to perform ordinary DNA profiling at the time these tests were performed. The result was that she performed tests that do not conform to any standard, any where. Now she is withholding the information about when and how those tests were performed.

And so she committed the Sin of Envy, the perception that someone else has something they are lacking.

Gluttony
What lies behind this prosecution? Some have said that Mignini actually thinks that Amanda and Raffaele are guilty. But to believe that it is so simple would be naive. Italy is the home of an idea called “dietrologia” “the science of what lies behind” that involves seeing the real truth behind the obvious facade. Preston and Spezi give a great background on this in Monster of Florence. “Dietrologia is the idea that the obvious thing cannot be the truth.”

And what is this dietrologist's explanation of the motivation behind the prosecution?

It is Gluttony, in the form of relentless pursuit of money, position, and power. “The chief error about gluttony is to think it only pertains to food.” Gluttony is an inordinate desire to consume more than that which one requires.

There are careers to be made, and careers that could be broken, in such an infamous case. There are multi-million dollar lawsuits, all hanging on a guilty verdict. Rudy, you see, has no money.

And so we have a feast of innocents, gorged upon by a circle of gluttons. It is a large, and festive circle, with Mignini at it's head. There is Patrick, hoping for his half million, and Maresca, who would bring his clients tens of millions, wanting for his cut. There are those hoping for career enhancement; Giobbi, Stefanoni, Comodi and the rest. And even the ordinary polizei, who drove the unlucky pair to prison for the first time, just days after the crime, with their car horns blaring in victory.

Gluttons are never the ones to say, “Enough!” That word must come from higher powers. From the judge and jurors? From the Italian government? The Italian people, or press? Or, perhaps, from a power, higher still?