Giuliano Mignini is a Convicted Criminal 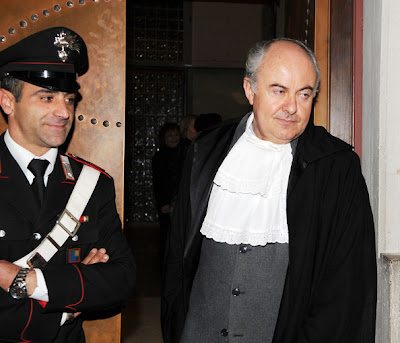 UPDATE
Mignini could face a disciplinary proceeding suspending his functions as prosector. From Perugia-Shock:

The penalty was suspended and an appeal is pending, but the Consiglio Superiore della Magistratura --the national organ of government of the judiciary-- could start disciplinary proceedings which could lead to the suspension of Mignini from his functions. The disciplinary trial, to be held behind closed doors, could start any time by CSM's own initiative. It would involve another magistrate defending Mignini and could last several weeks.

MAIN STORY
Condemned. Giuliano Mignini, the prosecutor who headed the investigation and prosecution of Amanda Knox and Raffaele Sollecito, is now a convicted criminal himself.
Before the verdict was handed down, Mignini told reporters "My conscience is clean. I know I didn't do anything."

He has received a 1 year and four month sentence (along with his partner, who got an extra two months) for abuse of office and bugging journalists in connection with the Fransesco Narducci case. Mignini's sentence was even more than the 10 months that the Florentine prosecutor, Luca Turco, had asked for.
Neither is likely to see jail time, however, because it is a first offense. Amazingly, Italian law allows prosecutor Mignini to keep his job for the time being as well.
Mignini said he was bewildered by the verdict. "I am shocked," he said. "It was totally unexpected."
And the irony continues as Mignini then complained that he has been the victim of a power struggle stating, "This case never should have been tried in Florence". Perhaps Mignini should have thought to seek the help of Seattle area judge Michael Heavey to help him request a change of venue.
Even SeattlePi.com's Andrea Vogt couldn't really spin this one, try as she might. It would be nice to have a quote from one of the prosecutors in Florence, you know, so that we can hear both sides.
Posted by Ray Turner at 10:24 AM