More audio at MyNorthwest.com
Posted by Ray Turner at 10:24 PM

Slander Suit Against Amanda Knox About to Begin

by LINDA BYRON / KING 5 News
Posted on May 13, 2010 at 6:12 PM
PERUGIA, Italy – Amanda Knox, the University of Washington exchange student who is serving 26 years for murder in Italy, is about to go on trial on new charges that could extend her sentence.
Read the rest of the article here.
Posted by Ray Turner at 6:37 PM

The Luminol Lies: The Case Against Amanda Knox and Raffaele Sollecito 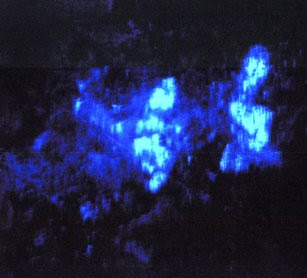 By Steve Moore,
Luminol has been a powerful weapon of the prosecution in the Kercher murder case.  Luminol is a reliable, useful forensic tool.  But it is much like the sniper rifles I fired when on SWAT:  Used correctly, it can save the life of the innocent.  But used carelessly or incorrectly, it is brutally efficient at killing the innocent, not the guilty.  An inch or two is all that it takes to change it from savior to murderer; and that inch depends solely on the training and skill of the sniper.
THE BLEACH CLEAN-UP LIE:  Much of the evidence presented in this case is based on luminol test results.  You may be more familiar with luminol than you think.  You know those light-sticks they sell at rock concerts and for camping?  Luminol.  The way luminal works at a crime scene is this:
1.   A mixture of luminol powder and hydrogen peroxide is mixed in a spray bottle like you buy at the grocery store.
2.  The mixture is sprayed on areas where blood (or other substances) are expected to be.
3.  The mixture reacts to many things, but one of them is the iron in hemoglobin (a component of blood) which causes the mixture to glow.  The luminol, like the light stick, has a limited fluorescent life.  In the forensics application, the glow lasts about 30 seconds.
4.  On those areas where you get a “hit”, you photograph quickly, and then test the site for indicators of what the “hit” was.  You first test for the presence of blood, then if not blood; other substances.  If it is blood, you can then conduct a DNA test. (Luminol does not disrupt blood or DNA testing).
5.  Importantly, you take a control sample from a nearby area that did NOT fluoresce, so you can be certain that your tests are valid.
6. There is no difference in the fluorescent color of luminol, no matter what substance it is reacting with.  If it reacts with blood, it is blue.  If it reacts with bleach, it is the same color of blue.
Imagine for a minute a schoolroom chalkboard with a couple of footprints drawn on it in chalk.  Now, take an eraser and erase the prints.  This is a little what a bleach-cleaned crime scene looks like under luminol examination.   A crime scene cleaned with bleach wouldn’t have footprints or fingerprints; it would have wide swaths of bleach, many times in arcs that give away the tell-tale motions of cleaning and wiping, kind of like we used to see on chalk-board erasures.  You would see luminol reactions everywhere; it would look like a huge florescent blue paint spill.
This was not what the Policia Scientifica found at Raffaele’s apartment on November 13.  They found approximately 14 luminol ‘hits’, and no blood.  And, no indications of a cleanup.  The crime scene investigators knew on November 13 from luminol tests that the scene wasn’t cleaned with bleach.  How can we be sure that the luminol ‘hits’ were not blood?  Because finding blood would be damaging evidence, and Mignini would have used it.  How do we know that the scene wasn’t cleaned with bleach?  Because of the 14 luminol ‘hits’, and the fact that a cleanup would be damaging evidence, and Mignini would have used it.
However, in a court filing on November 28, two weeks after the tests, Prosecutor Mignini alleged that Amanda Knox and Raffaele Sollecito cleaned both the cottage and Raffaele’s apartment with bleach.  He knew that to be untrue from luminol testing.  He had known for two weeks that no cleanup occurred at Raffaele’s cottage, but still insinuated it throughout the trial—knowing it to be a lie.
I have personally reviewed video of investigators searching for bleach and bleach receipts in Raffaele’s apartment about two days after the luminol tests there.  They found two bottles of bleach.  One unopened, the other nearly full; and no receipts for bleach purchase.
QUESTION:  Why would the police look for bleach and bleach receipts if they knew that no bleach cleanup occurred, and that no blood was ever in the apartment?
ANSWER:  The only possible reason to search for bleach or bleach receipts when you know no bleach cleanup occurred, and no blood was found, is to explain the lack of blood by inferring disingenuously (lying) that bleach was used. 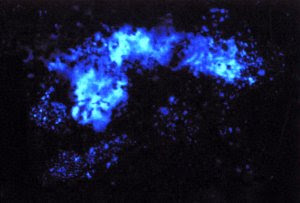 THE LIE ABOUT THE FOOTPRINTS IN THE HALLWAY:   It was obvious from the murder scene that no cleanup had been undertaken in Meredith’s room.  But 6 weeks after the murder, the investigators returned to the cottage and did extensive luminol testing, which further proved that no bleach clean-up occurred in the cottage, as had been stated as fact (without proof) by Mignini in court filings on November 28th—three weeks earlier.
The prosecution in this case stated that many bare footprints of Amanda Knox were found in the house (but none in Meredith’s room)  Never was there any attempt to determine whether they were indeed Amanda’s as opposed to any of the other roommates.  Theoretically, they could have been old footprints of Meredith.  These footprints, however, were detected with luminol.  Recapping, now; after luminol detection, a forensic investigator then……
1.  Tests for blood (after all, that’s what you’re looking for), and
2.  Tests for DNA.  (If it IS blood, you want to know whose it is).
Patrizia Stafanoni of the Policia Scientifica, who perpetrated this debacle, instead tested only for DNA.  Only for DNA?  You are looking for blood and you get a hit that could be blood or any of a dozen different substances, including bleach, and you don’t test to see if you hit the jackpot?  It begs the question of incompetence or intent.  Regardless, the DNA testing showed that whatever the substance was; Meredith’s DNA was not in it.
So even if it someone inexplicably believed it was blood, the prosecution’s own evidence proves that it could not have been the victim’s.
But Patrizia was not deterred by logic and fact.  In court, she said that she knew that the luminol stain was blood “…because of its color.”  Every trained forensic investigator (except, apparently Stefanoni) knows that luminol glows blue.  Only blue.  Not a different shade of blue for different substances…just blue.  What Stefanoni said, she knew to be false, or she was so incompetent that she should not have been allowed to destroy a crime scene.
What could have left the footprints, then?  Among the many things that we know reacts very strongly to luminol is bleach.  Even trace amounts of bleach will light-up luminol.  Amanda told the police that she came home that morning, took a shower and then looked for roommates in the house.  Amanda was in bare feet after leaving the shower.  Showers are routinely cleaned with substances that contain bleach.  The products are sprayed on the walls, and collect and pool invisibly on the shower floor.  Therefore, it would be almost incomprehensible for her not to have minute traces of bleach substances on the soles of her feet after standing in a shower cleaned by a modern cleaning product.  Remember, in Raffaele’s apartment, there were 14 luminol ‘hits’.  And where were nine of them?  In the bathroom.  Outside the shower.  And none were blood.  I would postulate that nearly every person in America and Italy who stepped out of a sanitary shower today left luminol-detectable footprints; including Mignini and Stefanoni.
As stated above, Stefanoni never offered any evidence to prove that the luminol footprints belonged to Amanda. If we go along with the assumption by the Policia Scientifica that the luminol prints were indeed Amanda’s, the evidence would prove the following:
1.  Amanda lived at the cottage
2.  Amanda was not in the room where the murder occurred before, during or after the murder.
3.  Amanda never stepped in, or came in contact with Meredith Kercher’s blood.
4.  There was no bleach cleanup of the crime scene.
5. Amanda came in contact with a non-blood substance (probably a bleach-based cleaner), likely while taking a shower that morning, and she walked in exactly the places she told the police she walked.
In reality then, Stefanoni’s own incompetent investigation actually verifies Amanda’s account of her morning.
FINAL THOUGHTS:  Even the ‘directed’ investigation of the Policia Scientifica could not detect a single footprint of Amanda in the murder room.  Not one.  A bunch of footprints were found in a non-blood substance outside the room, where she lived, (and having no relationship to Meredith at all), but not a single one in the murder room.  The police know a cleanup could NOT have happened.
So the footprints were never there to begin with.  Because Amanda wasn’t there.
In the U.S., this type of prosecutorial misconduct would almost certainly have resulted in a mistrial, and likely jail time for the prosecutor.  This is not to say that the Italian judicial system is corrupt.  There is no country in the world that does not have to deal with the occasional crooked cop or rogue prosecutor.  They know how to work the system.  America had a very prominent rogue in 2006.  But in that case, the authorities dropped all charges against the innocent and jailed the prosecutor.  It’s not whether a country is going to have to deal with this kind of corruption—it is when.  Of more importance is how that country reacts when it happens.  The action a country takes determines whether it is a country under laws or a vigilante society masquerading as a civilized nation.
One of the responsibilities of the FBI is to investigate police misconduct, and it is one of the more difficult investigations an FBI Agent can be assigned.  I myself have conducted some of these investigations.  I have seen the misconduct of police and prosecutors.  But I have never personally been involved in a case where the misconduct is as egregious and obvious as the Mignini actions in Perugia.  This was not a search for truth.  This was a crusade to convict.  It reminds me of that old joke about the crooked prosecutor; “I can convict anybody,” he said, “the innocent just take more time.”
Posted by Ray Turner at 5:52 PM