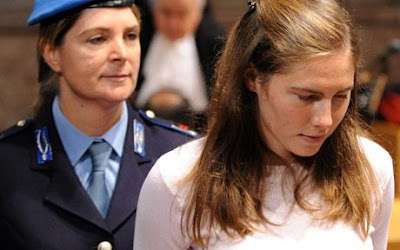 From Tim Egan of the New York Times:

In just a few days, a verdict is expected in the trial of Amanda Knox, the 22-year-old Seattle exchange student on trial in Italy for the throat-slashing murder of her British roommate two years ago. Her ex-boyfriend, Raffaele Sollecito, is also being tried.

The trial in the Umbrian college town of Perugia has dragged on just short of a year. As this week’s closing arguments showed once again, the case has very little to do with actual evidence and much to do with the ancient Italian code of saving face.

In closing arguments, Knox was described as a “Luciferina” and “a dirty-minded she-devil.” Preposterous, made-up sexual motives were ascribed to her.