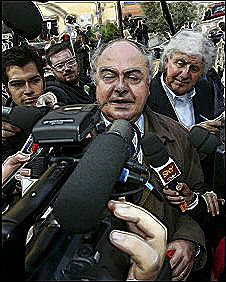 Today Linda Byron reported on NW Cable News on prosecutor Giuliano Mignini. You can watch the video here. Much has been made in the media about Mignini's charges for abuse of power in connection with the Monster of Florence case and his ability under Italian law to still serve as prosecutor while his own case is being resolved. Byron reported that Mignini's trial could take as long as 5 years, and until his case has reached finality, Mignini is free to remain as prosecutor.

Byron also interviewed Doug Preston, author of the book the Monster of Florence. Preston himself was interrogated by Mignini and told to leave Italy and said the following about the case against Amanda and Raffaelle:

"He decides right up front with almost no evidence based on his gut feeling or intuition that you're guilty and then sets out to prove it," he said.

I have not read Preston's book and am in no position to say whether Mignini is actually guilty of the charges against him. However, the fact that he is under indictment, (where the prosecutor against him has asked for jail time) but is still allowed to prosecute high level cases enunciates a major problem with the Italian system of justice. This is not an attack on Mignini himself. He maintains his innocence and isn't the person who created the laws.

But why is this a problem? For one it creates a cloud of illegitimacy on any proceeding that prosecutor takes part in. Second, because trials take so long in Italy, if a prosecutor were under indictment for even more serious charges, you run the risk of having a criminal serving as a prosecutor for years. And lastly, even if Italy decided to reform their system and suspend prosecutors when brought under indictment, because there is no right to speedy trial in Italy, this could mean an innocent prosecutor who has been indicted would be jobless for years through no fault of his own while his trial drags on.
Posted by Ray Turner at 12:07 AM