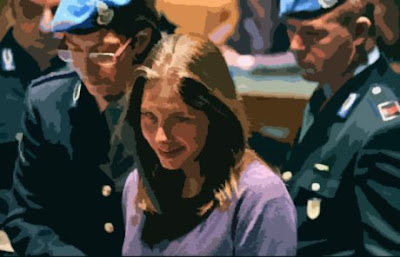 This is a transcript of a June 12, 2009 discussion of the case on CNN around the time where Amanda Knox testified. Judy Bachrach has written on the case for Vanity Fair Magazine. Jeff Toobin is a legal correspondent on CNN. So far I have not been able to find the video:

BROWN: Welcome back, everybody. Every night we bring you a breakout story from around the globe, the kind of stories that we believe break through all the noise. And sex, drugs and murder, pretty much always does.

Deborah Feyerick has the story of U.S. college student Amanda Knox on the witness stand for the first time in her trial in Italy. Take a look.

DEBORAH FEYERICK, CNN CORRESPONDENT (voice-over): Primly dressed in white, her hair in a ponytail, American student Amanda Knox was escorted into court to tell her story, the high point in a lurid sensational case.

AMANDA KNOX, ACCUSED OF MURDER: You're taking this right now.

FEYERICK: This 21-year-old whose MySpace nickname was "Foxy Knoxy" finally began answering a catalog of accusations including sexual assault and violence, including murder. The victim, Knox's British roommate, Meredith Kercher, was discovered seminude in the house they shared in Perugia, her throat cut, blood everywhere. That was in November 2007.

Knox, her Italian boyfriend, and another man were arrested soon after. One of the men has already been convicted of murder. Italian authorities concluded it was a drug-fueled game of group sex and assault that turned deadly.

LISA BLOOM, CNN LEGAL ANALYST: I would not be surprised if the jury and the judge ultimately did convict. There is enough. There is, for example, her DNA on the handle of a knife and on the blade of that knife, the victim's DNA.

FEYERICK: The trial had been closed to cameras, but the presiding judge let them in today, only to throw them right back out for causing too much disruption. Crammed in a press room, the cameras focused on a single TV as Knox denied almost everything.

FEYERICK: Knox said on the night of the killing she and her boyfriend smoked pot, had sex, and went to sleep, but at his house, not her own.

BLOOM: In my view, the weakest part of this case is motive. I mean, are we really to believe this 21-year-old college student with no prior criminal history of any kind would murder her roommate, knife her to death? Why? Because she refused to participate in some sex game?

FEYERICK: Knox also had excuses for the conflicting stories she told after her arrest, testifying she'd been beaten by her interrogators and led on by a translator.

KNOX: They called me a stupid liar. And they said that I was trying to protect someone.

BROWN: When we come back, we'll be talking to two reporters who have intimate details of the story in this case. They've been doing a lot of research into it. They'll share that with us.

Plus, breaking news, information coming in. We're getting election results from Iran. Christiane Amanpour will be joining us, as well. Stay with us.

BROWN: Back with our next big question -- sex, drugs, murder, is Amanda Knox guilty? How does a college kid from Seattle who has never been in trouble before end up in an Italian jail charged with the brutal murder of her roommate?

Jeff Toobin back with us to talk about that along with "In Session" anchor Jamie Floyd. Both have been tracking the story. And in Washington, Judy Bachrach. She wrote an in-depth article on the case for "Vanity Fair," as well.

Welcome to everybody. Judy, let me start with you. You heard Amanda Knox's testimony. She was in court today in Italy as we mentioned. I know you've done so much reporting on this case.

JUDY BACHRACH, CONTRIBUTING EDITOR, "VANITY FAIR": If she is guilty, then I'm a monkey. This girl did nothing. And the worst of it is that everybody in Italy knows it.

The prosecutor knows it. The police have messed up the evidence that so much that it's completely tainted. The knife, for instance, that your own reporter mentioned earlier, was a knife that was in the kitchen of Amanda Knox and her roommate, Meredith, and then turned up in the kitchen of her boyfriend. So naturally, it had everybody's DNA on it.

In other words, almost every piece of evidence is tainted and some of it is largely suspect. And the girl herself has been locked up, incarcerated for over a year and a half. And she has not fit for one of those years, she wasn't even charged with anything. And now she's finally charged a year and a half later and everybody in Italy knows she's innocent. And they continue with the prosecution.

I lived in Italy four and a half years. I know how troubled their judicial system is. But I think that Italy has a lot to apologize for. This is a national shame. And they are all culpable in their own way for letting this go forth, including the Italian press and the British press.

JEFFREY TOOBIN, CNN SENIOR LEGAL ANALYST: Well, I just think -- the thing that people don't realize about this case is that someone has been convicted of killing this woman. There is the guy --

BROWN: One of the guys, he's already in jail.

TOOBIN: He's already in jail and he's been convicted based on DNA evidence, and seems like pretty good evidence of killing this woman with a knife. Why is this woman on trial now?

BACHRACH: The reason she's on --

JAMIE FLOYD, ANCHOR, "IN SESSION": Well, I'll tell you why. I'll tell you why she's on trial. Because as in our country, certainly over there, the authorities went out in front of the story. They put themselves on the line, naming this young woman and her boyfriend and they don't want to admit a mistake. It's that simple. They don't want to admit they made a mistake, nor does the media.

BROWN: But, Judy, you also found in your article -- I had read that Italian officials were baffled by sort of her bizarre behavior after the murder. I mean, is that kind of what got her in all of this trouble?

BACHRACH: There is no doubt that Amanda's behavior after the murder was, as they often say, completely unacceptable and completely weird. The next day or two days later, she was out with her boyfriend necking in a store where she bought sexy lingerie and he talked about having wild sex with her. She went to the police station with her boyfriend, and they were giggling and laughing and ordering pizza.

So, of course, what she did was reproachable. She did not have a really reasonable reaction to the horrible massacre of her own roommate. That does not make her guilty. That makes her peculiar.

And from that, the judges, the prosecutor, everyone in Italy decided she was guilty. And there's one other issue. They did not like her social life.

The judges themselves in a most incredible moment actually wrote that they disapproved of her sex life. Therefore, she must be guilty of murder.

TOOBIN: Well, just think about also. Here she is, she's interrogated in Italian with an interpreter there, where even if her comments were somewhat unusual as Judy says, which I think is probably conceited. But what she actually said to the police I think is very much under controversy. And the other point is, her Italian is somewhat better now because she's been in an Italian prison for a year.

TOOBIN: Talk about a tough way to learn the language.

FLOYD: And even if she's been interrogated in English, the studies increasingly show that if you take a young person, someone under the age of 25 and interrogate them in the way this young woman was interrogated or even here in our country, those techniques can elicit a wrongful confession. People do, in fact, confess to crimes they did not commit, even murder.

BACHRACH: She even asked for a lawyer.

FLOYD: I think anything this young woman said is completely suspect.

BACHRACH: She even asked for a lawyer and they told her it wasn't a good idea, that it would just simply mess things up if she got a lawyer.

TOOBIN: They were probably right.

BROWN: All right. We're going to stay on top of this. A very strange case, it'll be interesting to see if she is able to get a fair trial in what is amounting to like the O.J. of Italy, I think.

Many thanks, Judy, Jamie, and, of course, Jeff, as always.

BROWN: No comment.
Posted by Ray Turner at 3:08 PM