Stefanoni Was Winging It 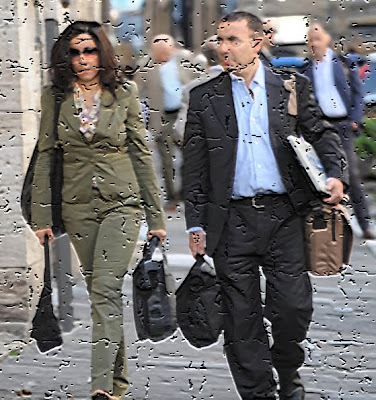 When people's lives and liberty are on the line, you hope the people on the job get it right. That is part of what is so disturbing about the technical work of Dr. Patrizia Stefanoni of the Scientifica Polizia. When Amanda and Raffaele's liberty was at stake, Stefanoni “winged it.” Made it up as she went along. She performed science improv. However you put it, her techniques were at odds with both accepted scientific methodology and with simple common sense.

Some of the serious issues surrounding LCN DNA profiling, shortened here to “LCN,” were described in Part I of this article. Now we pose the question: How does the test performed by Stefanoni on the kitchen knife blade DNA compare with the techniques called low copy number DNA profiling?

In a nutshell, it was worse. 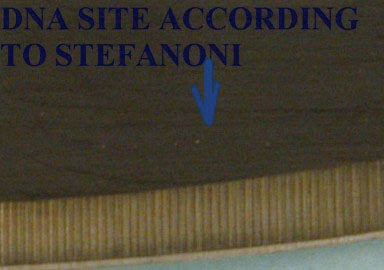 “But the substance was minimal and if she took it to test the blood than nothing would remain to test the DNA. So she said O la va o la spacca, make it or break it, and took a 20% of it to test it for blood: negative.

The test failed but Dr Patrizia wasn't discouraged and she took what remained, about 20 microliters, she dried it to 10 and tested it for DNA. It didn't sort anything but Mrs Stefanoni didn't give up and started to amplify and amplify until the first peaks appeared. The machine was not allowed to go beyond, but something there was and had to be taken out. The goodwill scientist broke the seals and kept amplifying and amplifying and amplifying until, in a forest of background noise peaks, some alleles emerged. She decided which were the stutters, the false ones, and which the real alleles, et voila! The genetic profile of Meredith Kercher was served to Renato Biondo who could deliver it on a silver plate to the one who hired him, the prosecutor.”

There are two common definitions of low copy number DNA profiling. The first states that profiling that falls below the normal stochastic limits can be considered LCN profiling. That is, when random noise becomes very loud because the sample size is very small, you have LCN, not standard DNA profiling. The second definition uses some quantity threshold criterion. If you have less than 200 picograms of DNA, for example, it is LCN. The critical factor is that the number of original template molecules in the sample is very few, on the order of 5 – 10.

The profiling that Stefanoni performed on the DNA from the blade of Raffaele's kitchen knife meets either of these definitions. There was so little DNA present that the instrument indicated no DNA until Stefanoni overrode the machine limits. This amplification increase was not achieved by the PCR technique. Once the sample has been chopped up and subjected to electrophoresis, it is too late for that. The increase was performed by other methods, such as lowering the threshold level, or simply changing the display scale until the minute fluorescence peaks were visible.

This makes the testing performed by Dr. Stefanoni even worse than the various methods being experimented with to perform normal LCN testing. In those cases, the experimenter knows that the sample is tiny, and tenuous, so they take appropriate precautions and use a higher number of PCR multiplication steps, typically 34 compared to 28, resulting in 2^6 (64) times as many molecules for the electrophoresis and fluorescence observation.

But remember that the main problems with LCN are introduced during the first few cycles of replication, when there are very few molecules and any difference in replication becomes a major artifact. That happened with the kitchen knife DNA, so all of those errors are well represented. In this case, however, not only were those artifacts introduced, but additional artifacts from the high amplification of the weak fluorescent signal also added noise to the vanishing weak signal. So that's one deficiency.

Yet another troubling question is raised by this mid-course change in experimental methodology. Since Stefanoni did not originally expect to perform LCN profiling, but only conventional profiling, she apparently did not observe any of the far more stringent protocols that are observed by other laboratories experimenting with use of LCN. These include extreme efforts to avoid contamination, provision of control tests, retention of a portion of the sample for subsequent testing, performance of the test on two samples for comparison, and clean up processing steps.

Even with those far more stringent protocols, LCN profiles are not allowed as evidence by the vast majority of the world's courts. But let's take a look at these proposed procedures that attempt to place LCN testing on a more reproducible, reliable basis. That way, we can illuminate the deficiencies in Stefanoni's science improv technique.

The following quotes are all from the Crown Prosecution Service in the U.K. at: http://www.cps.gov.uk/publications/prosecution/lcn_testing.html This is from an article that supports the use of LCN.

“The FSS LCN test requires an ultra-clean laboratory and so is more expensive and less widely offered than the standard test.... The site of this bespoke laboratory is remote from other DNA Units, operates stringent entry requirements, is fitted with positive air pressure and specialist lighting and chemical treatments to minimize DNA contamination.”

Stefanoni's procedure, in sharp contrast to these requirements, was performed in an ordinary DNA analysis laboratory with other DNA units present. An ultra-clean laboratory, positive air pressure systems, and photo and chemical DNA sterilization are vital techniques to avoid contamination of samples within the laboratory. None of these facilities and procedures appears to have existed for Stefanoni's test. That makes four more technique deficiencies.

“In LCN testing, each sample is divided into three parts or aliquots, and two of these are tested. The third is retained for further testing in the event of a failure or to confirm the presence of a mixture.... Only those DNA components that are seen twice are included in any calculation, to show that the result is reproducible.”

Stefanoni used 20% of the sample to test for blood, which came out negative. Whatever was on the knife, it wasn't Meredith's blood. Then she tested all of the remaining material at once, so there was no possibility of comparing two results, and nothing left for further testing. By the standards of the Crown Prosecution Services, Stefanoni's results would be thrown out by either of these criteria. And that makes two more deficiencies.

We're not through. Laboratories performing LCN rely heavily on what are called “negative controls.” The following quote is from The Law Society of Scotland's publication at: http://www.journalonline.co.uk/Magazine/52-2/1003857.aspx

“In forensic science the fact to be established is that the DNA profile originated from the material recovered from a crime scene or a suspect, not the investigator, the laboratory, packaging, or analytical instruments. A “negative control” is set up by simply processing a “blank” sample that has no DNA. All being well, this control will not show any DNA. The presence of DNA in the negative control illustrates that there has been a source of contamination in the analytical method. It does not, of itself, show where that occurred, merely that it has. The tradition over many years has been, for very sound reasons, that anything found in the “negative control” invalidates the analysis.

...even in a tightly controlled analytical procedure a significant number of supposedly negative controls give a positive result, i.e. they indicate the presence of DNA.”

Stefanoni apparently did not perform any negative controls with same system parameters as that used for the kitchen knife DNA. That's another deficiency.

And note here, the statement, “It does not, of itself, show where that (contamination) occurred, merely that it has.” When Sara Gino was pressed, under cross-examination, to say where and how Stefanoni contaminated the samples, she could not give a specific answer, but only cited, “the literature.” This was seen as a weak response. But how could she possibly know at what point in the handling or processing contamination by 50 picograms of material may have happened? This is something you test for the presence of, not something you can possibly see happen. Even if someone followed the sample with a microscope in real time, it would be virtually impossible to witness the inadvertent transfer of such a minute amount of material. Gino's response, that she could "cite the literature,” which lists typical sources of contamination to guard against, was correct.

But these negative controls do not check for all sources of contamination, they only check for contamination originating in the laboratory. If the kitchen knife were contaminated before being chosen at random from Raffaele's drawer, this type of control won't catch it. If it was contaminated while being picked up, while being transported, or anywhere else along it's path, this method will not show that. To do that, you would have to perform additional negative controls, say, on the other knives in the drawer, or from some other source, handled in the same manner as the kitchen knife. None of this was done. That's yet another, major deficiency.

So we see that in roughly nine distinct ways, Stefanoni's improv LCN DNA profiling was even worse than unproven and inadmissible LCN DNA profiling tests.
1. The DNA wasn't amplified enough; the very weak fluorescence was simply blown up.
2. The test site was not remote from other DNA tests to avoid contamination.
3. Specialized LCN-quality entry procedures to avoid contamination were not used.
4. A positive pressure environment was not maintained to exclude contamination.
5. Special LCN sterilization procedures to destroy errant DNA were not used.
6. The entire sample was consumed in a single test; no comparison of tests was possible.
7. No sample was retained for future reference. The test can never be reproduced.
8. No negative control tests were run to check for contamination.
9. No control tests to check for field contamination were performed.

There could be some mistakes in this analysis. Unlike Stefanoni, who claims that there has never been contamination in her laboratory, I make mistakes. It may be six deficiencies, or an even dozen. We do not know the exact details of how samples were handled in the laboratory of Patrizia Stefanoni. Neither does the defense team, or the court, as determined by Judge Massei when he ruled that she needed to provide more information. In fact, when you see the clear discrepancies between what was said to have happened, and what you can see happening on the specimen collection video tapes, it is clear that not even Stefanoni really knows what transpired during the collection, transportation, storage, and subsequent analysis of samples in this case.

There are, perhaps, some things that she should have known, that clearly went wrong. A glove not changed, as evidenced by the crease in the exact same spot after she claimed to have changed it in between samples. A specimen handled by more than one person, another transported in packaging that was not sterile. A specimen retrieved, and then dropped on the floor, deliberately or otherwise, after it had been on that floor for 47 days after the crime.

But, perhaps most importantly, in this realm of sensitivity, in this extreme, almost ethereal realm where picograms determine everything, it is just not possible for ordinary handling measures to prevent contamination of the results. The DNA on the kitchen knife blade is more likely to have been contamination, than to have been a valid forensic sample.

Special thanks to my molecular biologist friend, Dr. K., for reviewing these articles.

Article copied with permission from Mark at http://freeaman.001webs.com/.

All materials on this web site are Copyright, 2009 by the publisher. Reproduction rights will be granted to any compatible site interested in re-publishing them.