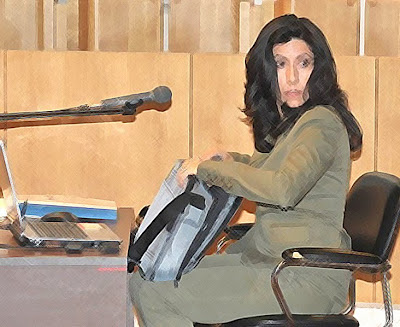 Above picture is Patricia Stefanoni, the woman who magically found the DNA of Meredith Kercher's on a kitchen knife police found in a drawer in Raffaelle Sollecito's apartment. Coincidentally, no other knives in the drawer were tested.

It's called “Low Copy Number DNA” profiling (LCN DNA), and it could be a powerful tool against crime, or a chilling assault on our freedom. It is the technique used to claim that the kitchen knife found in Raffaelle Solecito's kitchen drawer had Meredith Kercher's DNA on the blade. If it is used to convict Amanda Knox of murder, she may well prove to have been the “canary in the mine,” drawing our attention to a potentially serious threat to civil liberties everywhere.

We have all heard about the remarkable abilities of DNA profiling to identify criminals and others from traces of their blood or flakes of their skin. We have been told that the odds of a mistake being made are “billions and billions” to one in Carl Saganesque tones of certainty. But this new twist on the technique radically changes those odds, and not in a good way.

Conventional DNA testing is done with a microscopic, but still significant size sample of DNA, on the order of 1 nanogram (1 billionth of a gram). This quantity provides enough material to ensure that it is physically associated with the actual evidence at a crime scene; a smear of blood, a patch of hair, a cigarette butt. You extract a sample from the specimen, and profile it. And you still have the specimen. You can extract a second sample, and test it again. Or pass it to the defense for their comparative analysis. The experiment is reproducible because there is enough material present to do the test more than once.

“Interpretation of DNA profiles is assisted by the use of systems that are not too sensitive. This is important because the scientist often needs to associate the presence of a bloodstain (or other evidence) with the DNA profile itself.” Peter Gill, Forensic Science Service, U.K. Article available online at: http://www.denverda.org/DNA_Documents/LCN%20DNA%20Profiling.pdf

This DNA is replicated by a method called the Polymerase Chain Reaction (PCR). This reaction splits the two halves of DNA apart, adds complementary base pairs to each of the halves, and voila, you have two DNA chains where before you had one. Do it again, and you have 4, 8, 16, 32... 17 billion (2^34). Ideally, each cycle of PCR gives twice the number of copies, so you have 2^N copies after N replication cycles.

It is then diced up in a selective, specific way, and the pieces are spread out by a method called electrophoresis, which drives different lengths of DNA at different speeds through a gelatine material. The pattern of these different lengths is then analyzed statistically, and compared with the known DNA from various people. If the patterns match, the DNA is thought to match.

This much is straightforward. Conventional DNA profiling is supported by a well-established body of scientifically controlled experiments, it yields reproducible results, and these results have been extremely valuable, both in identifying the guilty, and in exonerating the innocent. But LCN DNA testing is a different matter entirely.

Low copy number DNA profiling is performed by increasing the number of replication steps compared with conventional DNA testing, so that an even smaller sample is blown up to a large enough quantity for electrophoresis. Every added step roughly doubles the number of DNA chains, but also introduces exponentially greater chances for errors in the replication process. This is particularly important when the initial sample is very small.

When a large enough sample is available as the starting “template,” the copying process is performed on a large number of molecules right from the start. Any small variation in whether or not a given molecule copies, and what parts of it copy, are washed out because there are a lot of templates available. If you miss one in one hundred, you only have a 1% error. However, if you only have a few template molecules, and any part is missed in the first stage, that error continues to be amplified throughout the PCR process. Miss one in five, and the error for that single step jumps to 20%. Some profile peaks may be diminished, some may be increased, some may drop out entirely, and “stutters” may occur, poorly understood false peaks that are, in a sense, combinations of other peaks.

The statistical variation resulting from the tiny number of starting templates is significant. In fact, LCN DNA profiling is defined as profiling after replication from such a small amount of DNA that the results fall below the normal stochastic limits of the technique. “Stochastic” means that an element of chance is involved, so that the system is not deterministic. It contains a significant amount of random noise. As a result, repeating the same LCN DNA tests on identical starting samples of material does not produce nearly identical profiles, unlike conventional DNA testing.

Another technique, “touch DNA” is profiling that is performed on DNA obtained from tiny amounts of skin cells that are deposited, along with oils, from fingerprints and similar “touches.” These tiny amounts may be replicated by either LCN DNA methods, involving more replication cycles and operating below the stochastic limits, or by conventional replication techniques if a large enough sample is present.

Bode Technology is a biotech company that is developing a touch DNA technique, and they are very careful to distinguish the two:

“Touch DNA is not Low Copy Number (LCN) DNA. LCN DNA profiling allows a very small amount of DNA to be analyzed, from as little as 5 to 20 cells. Because of the small amount of starting DNA in LCN samples, many more cycles of amplification are necessary.”

To avoid this serious shortcoming, Bode performs standard DNA profiling on their touch samples, which can then be admitted as evidence in court.

Both techniques, however, can share a common issue, that of reproducibility. If the sample size is small enough, there is nothing left after the replication and analysis to repeat the experiment. It cannot be reproduced. In scientific work, an irreproducible result is automatically suspect because there is no way of confirming it. There is even a famous science humor publication named the Journal of Irreproducible Results (www.jir.com).

LCN DNA profiling is an irreproducible technique for two distinct reasons. First, because the sample was too small for conventional testing in the first place, it is completely consumed and destroyed in the course of performing the LCN test. No sample, no reproducibility. Second, the test results that are produced contain this strong, random variability. If you perform LCN DNA profiling on ten identical samples, you can get ten different profiles, each differing from the others because of amplification of statistical flukes.

In addition to the issue of reproducibility, LCN DNA is simply a very new technique, and that should prompt caution. In fact, most researchers in the field fill their papers with appropriate caveats about the need for further development, and further testing before the technique is widely used. Conventional DNA profiling has been rigorously tested, reproducibly performed in many laboratories around the world, and validated with carefully designed control tests. With LCN DNA profiling, no such body of controlled tests yet exists. The method is too new, too quirky, and too unreliable to be safely used until it is much better understood.

Now let's think about what all this means for civil liberties. How would you like to live in a world in which any person can be convicted of any crime, anywhere, any time, on the basis of unassailable, “scientific” evidence? The evidence will be unassailable, because there will be nothing left of it by the time the analysis is through. They will be able to swab an object at a crime scene, LCN DNA profile it, and present it in court with no risk of contradiction. It will be their word against yours, and they will have a bunch of apparent, “scientific proof” backing them up. This is a recipe for a police state.

What does it mean for Amanda Knox and Raffaelle Solecito? The DNA profile from the knife blade in Raffaelle's kitchen drawer that supposedly matches that of Meredith Kercher was performed by LCN DNA testing. It can never be reproduced. The “any crime, anywhere, any time” danger expressed in the previous paragraph is not hypothetical, it is actually happening to Amanda and Raffaelle. This form of evidence amounts to, simply, “The defendant is guilty because we say so.” Yet it is even worse. It is an un-testable assertion backed up by a bunch of impressive charts and statistics and the magic words, “science” and “DNA.” It has all of the appearance of scientific certainty with none of the substance. It is not yet truly scientific, and it is anything but certain.

Keep in mind that there is nothing especially “Italian” about this frightening new investigative technique. Most of the early work was done in Britain, and it is being studied in forensic labs around the world. Be patient, LCN DNA matching is coming soon to a forensic laboratory near you. How can we be sure that the technique won't be grossly misused, leading to the convictions of many innocent people, not just these two? We can't.

While this article gives some background on DNA, a more thorough overall primer is available at: http://www.scientific.org/tutorials/articles/riley/riley.html

“Because LCN analysis by its nature is not reproducible, it cannot be considered as robust as that associated with conventional DNA typing.”From: http://www.denverda.org/DNA_Documents/CMJ%20Budowle.pdf

“The ability of small amounts of DNA to produce false and misleading results is well-known and well-documented within the research community, where the technology originated.”
From: http://www.scientific.org/tutorials/articles/riley/riley.html

Article copied with permission from Mark at http://freeaman.001webs.com/.

All materials on this web site are Copyright, 2009 by the publisher. Reproduction rights will be granted to any compatible site interested in re-publishing them.