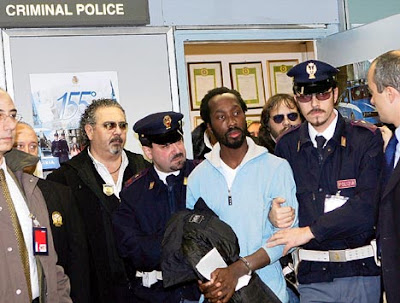 For any fair minded observer, today was not a surprise at all. We learned absolutely nothing new about what happened. Proceedings in Rudy Guede's appeal have been adjourned to December 21st when Guede's attorneys will argue their case. If you were expecting anything significant to come out of these proceedings, you probably have pretty bad instincts.

Guede told a fanciful story about the murder being a fight over money between Amanda Knox and Meredith Kercher and then rushed into the room where he fought off an attacker. Adding insult to injury, Guede claims he actually tried to save Meredith and tried to mop off her blood with towels, but then panicked and left.

Let us not forget that Guede is the same man whose DNA was found in Meredith's private area, and that his bloody hand print was found on Meredith's purse (and yet he was acquitted of the theft charge--a perfect example of the ridiculousness of this case).

If anything became clear today, it is becoming harder and harder to envision a scenario where all three defendants would come together to participate in this crime. Mignini has an impossible task at creating a realistic scenario involving the three. Whether that will matter---well, I am not so confident in the Italian judges, but time will tell.

Theoretically, Guede's trial, and any testimony therein, has absolutely no impact or weight with the trial against Knox and Sollecito. However, the judges and jury are not sequestered.

Rudy Guede, 22, said that on the night of the murder he heard Miss Kercher and Miss Knox, her American room-mate, arguing over money in the bathroom of the house that they shared in the Italian university town of Perugia.

Minutes later he heard a “piercing scream”, he told the court in Perugia, where the case has been heard since January.

The court is expected to reach a verdict on Miss Knox, 22, of Seattle, and her Italian former boyfriend, Raffaele Sollecito, 26, early next month, and will begin hearing closing arguments on Friday. They deny any wrongdoing.

Guede addressed the court for the first time as he launched an appeal against his 30-year jail sentence, handed down last year in a separate trial during which he was convicted of the murder.