Amanda Knox's Slander Charge for Claiming She Was Hit 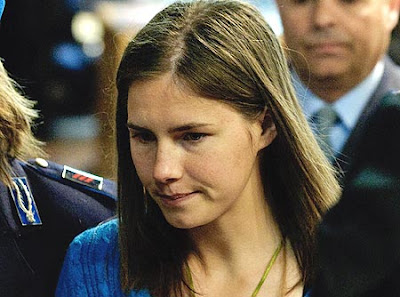 From Peruga-Shock:
They were coming to the trial to enjoy the show. They were sitting in the last rows looking at her (and not only at her) with hate. They were afraid she could say that.
And she said it, very simply: "You are a liar!" And, bam! She hit me on my head! And all the description we know.
continue here
More from Nick Pisa, Daily Mail:

"Jailed student killer Amanda Knox is to be charged with slander after she claimed she was beaten by police, a prosecutor revealed today.

Knox, 22, was sentenced to 26 years last month after being convicted of the brutal sex murder of her flatmate Meredith Kercher, 21, who was knifed to death for refusing to take part in a sex game.

During Knox's trial she claimed twice that police had beaten her during questioning - although when asked in court if she could identify them she was unable to do so."

The piling on continues.
Posted by Ray Turner at 4:25 PM