Co-Prosecutor Manuela Comodi Confirms: There Was No Slander Investigation 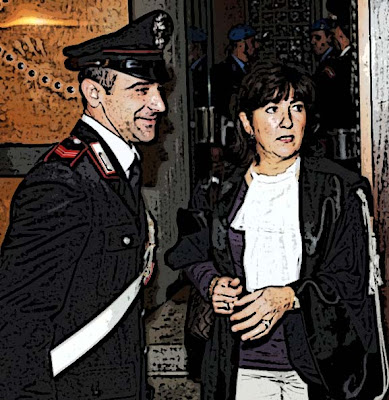 As anyone following the case knows, only a few days ago, Amanda Knox was informed that the slander investigation against her for stating that police hit her is over. No charges have officially been filed as of yet.
On January 19, 2010, Frank Sfarzo of Perugia-Shock posted a short interview with Co-Prosecutor Manuela Comodi, about the nature of the investigation into this charge.
The revelation? There was no investigation. A short snippet:

Q: What was done as investigation?
A: Nothing, what should we have done? She did it in front of everyone.
Q: You didn't think you could maybe investigate if what she said was true?
A: And what should we have done, interview the interpreter?
Q: The interpreter and all other witnesses, the suspect, the victims. Run the investigation, you know how to make them.
A: Please... there's nothing to investigate, she did the slander in public. And everybody was already heard at the trial.

So no witnesses were interviewed, not even the interpreter. The fact that there was no investigation begs the question: Why now? Incidentally, it didn't occur to even a single reporter to mention the convenient timing of all this, just days before Mignini was found guilty in Florence for abuse of office. 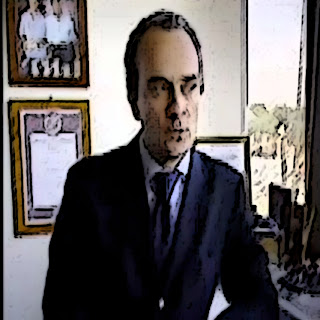 Revisiting the Interrogation
If we only had the testimony of the Perugian police to go on, the answer would be settled over Amanda's interrogation. They treated her like a queen, gave her chamomile and cookies, and out of the blue for no reason, because the police were treating her so nicely, she decided to give them the gift of falsely accusing Patrick Lumumba of murdering Meredith Kercher. At least this was the testimony of Perugian officers Monica Napoleoni, Lorena Zuaringi, and Rita Ficarra. However, it is worth noting that their recollection of the final interrogation before Amanda's arrest materially contradicts the testimony of not only Amanda, but of the lead investigator from Rome, Edgardo Giobbi (you might remember him from this video here).

So we have three conflicting accounts of the intterogation: Amanda's, the Perugian police, and Giobbi from Rome.

Let's look at the three accounts. 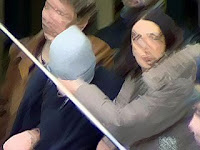 1. Testimonies of Perugian Police: A whole book could be written on just Amanda Knox's interrogation alone. Monica Napoleoni, head of the Perugian murder squad, testified that when Amanda Knox came to the police station the night she was arrested, she found Amanda Knox's actions "very strange", describing both Amanda and Raffaelle's attitudes as "bizarre". Napoleoni noted that Knox and Sollecito seemed indifferent which she claims she found disturbing considering the circumstances.

Rita Ficarra, who worked for the Perugian narcotics unit, testified that no lawyer was given to Knox during the interrogation at this stage because she was not formally a suspect. Ficarra eventually told Knox that Sollecito was no longer supporting her alibi. She told Knox "....if you tell me a lie one time, that is comprehensible, but if you lie again--even if it is a small lie-- it makes you less credible." Nevertheless, it should be noted that Ficarra also described Knox as being "shocked" even at the beginning of her visit to the police station.

Then Knox eventually broke down and accused Patrick Lumumba. The interrogation was stopped after Amanda admitted being at the scence of the crime, and she was now formally a suspect.

During the testimony of the interrogators, as somewhat a surprise to observers in court, the Perugian police claimed that Amanda had spontaneously named Patrick, and that the police had no idea who Patrick was. They further claimed that Knox hadn't even been called to the police station.

Napoleoni stated that Knox was "treated very well. She was given water, camomile tea and breakfast. She was given cakes from a vending machine and then taken to the canteen at the police station for something to eat." She further stated that the memorandum Amanda wrote was written of her own free will.

The basics of the Patrick accusation, according to Napoleoni, was that Amanda opened her phone to a text message from Patrick which said "A più tardi, buona serata" ("see you later"). The police see the text, and Amanda tears up and says "He's bad, he's bad....he's the murderer!". The interrogation stops and PM Mignini is called in.

After the Perugian police testified, their description of events was protested by Knox by means of a spontaneous statement:

"I just wanted to say that I'm really very sorry to hear these things because frankly what they said is not true. They treated me as a person only after I released the statements. Only after that, I could go to the toilet. Thank you."

No claims of hitting were made in the spontaneous statement, but would be made later. An important point to mention (based on the prosecution's own timeline), Amanda's interrogation lasted until 5:45 in the morning, and she had been interrogated for about 7 hours by this point (a pretty long time for someone police claim was not yet a 'suspect'). 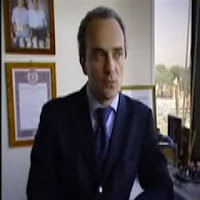 Contradiction #1: Ficarra, Napoleoni and Zuaringi all stated that only Raffaelle was called in for an interrogation. In fact, as Frank Sfarzo of Perugia-Shock points out, these officers actually testified that they rebuked Amanda over and over again for coming to the police station in the first place, stating that the call was only for Raffaelle to be brought to the station. This Raffaelle only invitation is directly contradicted by Giobbi's testimony, who stated that he was "mathematically sure" that he gave the order to have both Amanda Knox and Raffaelle brought to the station for questioning.

Contradiction # 2: The Perugian police boasted of how nicely they treated Amanda. They gave her cake and camomile, etc. Giobbi wasn't in the interview rooms, instead hiding in the director's room. He testified that he could hear Amanda screaming, something not mentioned by the chamomile bearing Perugian police. 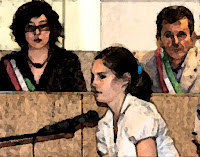 Though well known to followers of the case, it's worth briefly recounting Amanda's testimony of the interrogation. During her testimony, Amanda stated that police called her a "stupid liar" and hit her on the back of the head after Knox denied she was lying. She further stated that the officers kept suggesting Patrick Lumumba's name. In short, suffice it to say that Amanda has continued to claim that she was not treated well by the police. Her version of events certainly indicate an interrogation that was accusatory in nature (though Perugian police claim she was not a suspect....), and certainly tense.

The Elephant in the Room: The Audio of the Interrogation 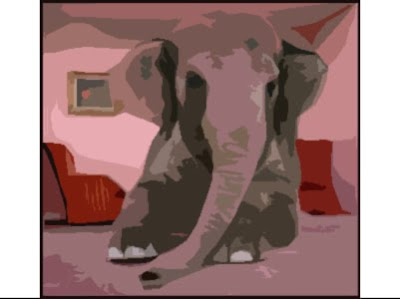 No one can really seem to answer whether an audio of the interrogation actually took place. It is difficult to believe an audio recording does not exist, but prosecutor Giuliano Mignini in the recent More4 documentary (Directed by Garfield Kennedy) alleged that no audio was ever taken, citing the excitement surrounding the accusation of Patrick Lumumba. They simply "forgot" to record it. So we have two options: (1) An audio or video of Amanda Knox's interrogation was never recorded OR (2) an audio or video was recorded. Pretty simple competing trains of thought here. So let's look at both options.

1. The Interrogation Was Never Recorded: It is very hard to believe that this was the case for many reasons, but the one that sticks out the most is the fact that they were recording everything else Amanda and Raffaele were saying. This fact has been known going back all the way to 2007. As reported on Dateline NBC on December, 21, 2007, "By [Saturday, Nov. 3] authorities were bugging every phone call placed and received by the young lovers." Every phone call! The police were more than happy to release what they felt were incriminating statements to the press from these bugged conversations. (Another exploration to consider: It's very strange for the police to be bugging the two since they were supposedly just being treated as witnesses....).

Even if we take Giuliano Mignini at his word in describing the reasons for the lack of audio tape, we still have to deal with the fact that he wasn't there for the portion of interrogation where Amanda claimed she was hit.

So there are many unanswered questions. The police were tapping the phones of Amanda and Raffaelle. We know from the testimony that they were suspicious of everything they were doing. We know that Giobbi testified that both Amanda and Raffaele were called into the police station, not of their own volition to help as witnesses.

Something isn't adding up.

(Note: You can also read Mignini's explanation in Italian here.)

Conclusion: One can subjectively come to the conclusion that Amanda was or was not hit (I think it's obvious where I stand on the issue). That being said, for Manuela Comodi to explicitly say that no investigation was necessary where there are a multitude of questions needing to be answered in order for any sort of slander to be proven is extremely showing. Certainly the actual court statements during Amanda Knox's murder trial are not enough to prove anything in regards to slander one way or another. Thus, any way you look at it, Comodi is either amazingly corrupt or amazingly inept, exhibiting a pathetic lack of diligence to follow through with basic inquiry that is in the interest of justice. Of course, this is the kind of situation one can expect when we ask the same police who are accusing defendants of slander to investigate themselves. The police will always win that one.