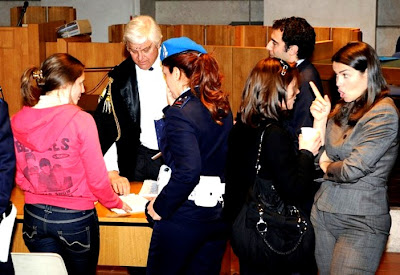 Co-prosecutor, Giuliano Mignini attempted to prove that he can read minds and has psychic abilities to see the past in ways previously unknown to man. I have to say that out of all the cases I've followed, I've never seen a prosecutor who made so many unsubstantiated assumptions based on no evidence. However, the fact that Mignini is forced to make such assumptions highlights just how weak his case truly must be.

And ever more embarrassing, convicted Rudy Guede's story suddenly has crediblity in the eyes of Mignini. Ann Wise reports: "Mignini said the two women had argued over rent money missing from Kercher's room. "

Of course, the only source that any sort of argument of this kind occurred is from Rudy Guede. And so Mignini theorizes that this is how it began, and it thus resulted in a brutal stabbing with Amanada as the ring leader. A strange brand of theorizing based on unsubstantiated "could haves" and "maybes".

Mignini stated further in his closing: "After a heated discussion the three, under the influence of the drugs, and probably alcohol as well, decide to put into action the project they had of involving an extreme sex game," he said. (Probably alcohol? Another great unsupported supposition to conveniently throw in it seems)

And now thankfully, we can put to rest the rumor floating around the blogosphere that the "sex game" theory was one put out by Knox PR to make Mignini look unhinged and irrational. Mignini solved the question for us in this respect; it's best to remember it again for posterity's sake should revisionist bloggers attempt to rewrite history and coverup for Mignini's penchant for the absurd and unbelievable.

And then Mignini gives us the motive we've all been waiting for:

"Amanda has the occasion to get back at that overly serious and moralizing English girl who she felt was too tied to the closed group of her English friends, and who accused her not too subtly of not being orderly or clean, and who criticized her for being too easy with boys," Mignini said.
"Amanda nurtured her hate for Meredith, but that night that hate could explode. For Amanda the moment had come to take revenge on that prissy girl. That is what she must have thought. And in a crescendo of threats and increasing violence, Meredith's ordeal begins."

The criticism of one's hygiene can make a person do awful things....
Moreoever, Mignini proved that having no evidence to support an assertion can actually be a great thing. Rather than being forced to constrict ones theory based on mountains of solid evidence, when one has very little to go on, he can let his imagination run wild with unsubstantiated theories:


The prosecutor said Knox likely insulted Kercher during the assault, and imagines Knox saying, "Now you'll be forced to have sex."

And so again we are left with Mignini's grand suppositions. Interesting from a literary or satire perspective, but Mignini believes what he is saying is all too real.

A few weeks ago Mignini offered to "surprise" us all. Well, he did just that. But not in the way anyone would expect.

Amanda Knox brings home Rudi and Raffaele. In this order, yes. Because, for her, Rudi comes first and then, only as a second choice, Raffaele.

Visit msnbc.com for Breaking News, World News, and News about the Economy