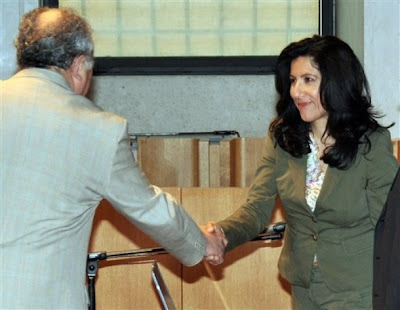 Today, 9 US specialists in DNA have strongly outlined their concerns over two crucial pieces of evidence (knife and bra clasp) in the case against Amanda Knox and Raffaelle Sollecito in an open letter/petition (Full copy at bottom of this post).

On the eve of the verdict of the high-profile trial in Perugia, Italy, in which Amanda Knox and Raffaele Sollecito are charged with the murder of British student Meredith Kercher, DNA evidence brought by the prosecution is being questioned by nine US specialists in DNA forensics.

The trial is in its final stages, with a verdict expected on 7 December. Knox and Sollecito are pleading not guilty. In an open letter, the US specialists outline their concerns with two pieces of DNA evidence that are central to the case against Knox and Sollecito.

The defence has already suggested that the amount of DNA allegedly linking the pair to the crime is too small to be definitive. The letter raises the possibility that this DNA was introduced through contamination of the evidence and concludes that the DNA test results "could have been obtained even if no crime had occurred".

Two years ago, Kercher was found dead, with cuts to her throat, in the accommodation she shared with Knox in Perugia. Although a third suspect, Rudy Guede, has been convicted of her murder, the prosecution claims that Knox and Sollecito helped.

As for Knox's defenders, since the early days in the case, American lawyers and experts have criticized the evidence. New to that chorus is Greg Hampikian, chief of the Idaho branch of the Innocence Project, who released a report to TIME saying the knife and bra clasp evidence against Knox are meaningless under prevailing standards in U.S. courts. Kercher's bra clasp, discovered at the scene of the murder six weeks later and revealed to the press the morning after a defense expert demolished other material evidence on a national television show, "cannot reliably be interpreted to show that Sollecito's DNA was on the bra clasp at the time of the murder" and therefore "does not constitute credible evidence," Hampikian wrote.