Behind Giuliano Mignini's Own Conviction 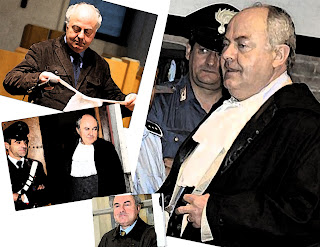 A few months ago the head prosecutor in the case against Amanda Knox and Raffaele Sollecito, Giuliano Mignini, was convicted for conducting illegal investigations in connection with the Narducci case, an alleged murder originally thought to be a suicide. Incidentally, Mignini submitted a ridiculous "switched-body" scenario in that case just as ludicrous as his theory in the case at hand. For some context on the Narducci case, here is a short explanation.

Aside from the possibility of being forced from office as prosecutor, the Narducci case could have further repurcussions. Mignini's computer was seized and contained an enemies list. You can read more on that here.

Below is an explanation of the charges and conviction against Giuliano Mignini as well as the charge where he was acquitted.

What were the charges Giuliano Mignini was convicted for?

The charges against Giuliano Mignini are threefold and involve more than just illegal wiretapping. The court convicted Mignini for the following:


1.) Illegally investigating journalists who had criticized him with the "intent to harass or deter them from pursuing their legitimate profession". Specifically the court found that Mignini had targeted Italian journalists Vincenzo Tessandori, Gennaro De Stefano, and Roberto Fiasconaro, because they had criticized his investigations into the death of Narducci.

Why were Giuliano Mignini's investigations illegal?
These investigations were illegal because they involved illegal wiretaps (wiretaps without judicial approval) and Mignini illegally created investigative files for the targets outside of normal judicial procedures and approvals. These were illegal freelance investigations, the court determined, designed to "harass and intimidate" people who had criticized him or Chief Inspector Michele Giuttari for their conduct in the Narducci investigation.

What was Giuliano Mignini acquitted of?
Along with being charged with conducting illegal investigations, Mignini was also charged with "aiding and abetting" where he was accused of informing Giuttari that he was the target of a criminal inquiry by the "procura di Genova" who was investigating Giuttari for doctoring the transcript and tape of a wiretap to put false and incriminating words in the mouth of a targeted suspect.

How serious are the charges?
Some uninformed bloggers have described the charges against Mignini as an "administrative charge"---a claim which is completely bogus. Mignini was given a 16 month prison sentence, 6 months more than even the prosecutor had asked for. However, he is unlikely to see jail time and his sentence is suspended while his case is on appeal.

While Mignini will most likely never spend time in jail, if his conviction is upheld, he will be removed from public office and never be allowed to serve as a prosecutor or judge again.

It is important to keep in mind that the Florentine judge in this case imposed a heavier sentence than what was asked for, which came as a huge surprise to even Mignini himself. A judge handing out a stronger sentence than asked for is extremely rare in Italy and serves as an incredibly strong condemnation of Mignini's illegal behavior (though under Italian law he is still presumed innocent until he has exhausted his appeals---as are Amanda Knox and Raffaele Sollecito).
NOTE: Whenever you are in doubt about how serious a charge is, just look at the length of the possible sentence. That is the barometer for how seriously society judges that specific crime.

For the news round up from the day of Mignini's conviction, click here.
For info on the defamation suits related to this case, including Giuliano Mignini, click here.

Rayrayturner@gmail.com
Posted by Ray Turner at 12:13 AM