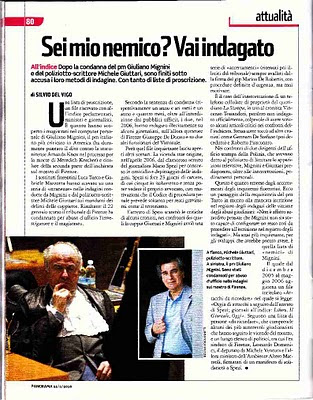 Translated from Panorama, an Italian Magazine.  For original version in Italian click here.
You're my enemy? Then I will indict you.
The Index. Following the conviction of the pm Giuliano Mignini and of the policeman-turned-writer Michele Giuttari, their methods of investigation have come under severe criticism. Many blacklists found.
A blacklist, a secret file with the names of parliamentarians, ministers, and journalists. This is what investigators have discovered on the personal computer of Giuliano Mignini, the Italian prosecutor who has been heavily criticized in America (the same one who pointed a severely accusatory finger against the American Amanda Knox in the trial for the death of Meredith Kercher) and the lead investigator in the second part of the investigation of the Monster of Florence.
Florentine prosecutors Luca Turco and Gabriele Mazzotta have uncovered a series of “strange items” in the investigations conducted by Mignini and the policeman-writer Michele Giuttari, who were searching for the masterminds behind the serial killings of couples. The end result: on January 22 the Tribunale of Florence convicted the magistrate and the chief inspector for abuse of office.
According to the verdict of conviction (the two men received respectively a year and six months and a year and four months in prison, beyond a ban on holding public office), the two, in 2006, illegally investigated certain journalists, the police chief of Florence Giuseppe De Donno and two high officials of the Viminale [the Ministry of the Interior in Rome].
However, the disturbing files in question opened other possibilities. The affair had its origin in April 2006, during the sensational arrest of the journalist Mario Spezi for involvement in murder and obstruction of justice. Spezi spent 23 days in prison, of which five were spent in an isolation cell, denied access to his attorney, under laws of the Penal Code meant to be applied only to extremely dangerous criminals such as terrorists.
Spezi’s arrest unleashed scathing criticism by some journalists. Giuttari and Mignini responded with a series of “assessments” (later judged illegal by the tribunale) authorized under the signature of Judge Marina De Robertis, who used a legal procedure meant only to be employed in an emergency; but these emergency authorizations were never retroactively justified as required by law. 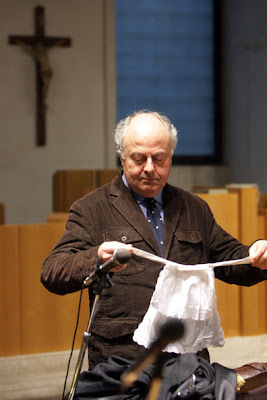 One of the cases involved the wiretapping of a cellular telephone owned by the daily newspaper, La Stampa, in use by the reporter Vincenzo Tessandori, who was moreover illegally investigated beyond normal judicial procedures, but who had written several articles critical of the investigation. The same illegal harassment was directed at other newspaper reporters such as Gennaro De Stefano (who has since died) and Roberto Fiasconaro.
Giuttari and Mignini ordered the wiretapping and shadowing of two police officials from the press office of the Polizia in Rome, who had earlier asked Giuttari to limit his television appearances.
These are the facts that have emerged from the Florentine inquiries. Here is a passage from the indictments written by the pm Turco regarding the fact that the victims of this judicial abuse were investigated illegally, outside of normal judicial procedures. “If Mignini suspected a crime had been committed, he had the capacity and obligation to investigate the suspect in a proper and legal manner.” But even more disturbing, for the repercussions it had, is the list of “enemies” of Mignini.
From December 2005 to May 2006 a file was created and added to entitled “Attacks to Remember”, in which there is another file: “Orgy of Attacks Following the Arrest of Spezi; an index of newspapers: Libero, Il Giornale, Oggi.” Following that is a long list of people “To Remember” that consisted of the names of some of the most prominent judges involved in the case of the Monster of Florence, a long list of politicians, among which could be found the ex-mayor of Florence, Leonardo Domenici, the deputy mayor Michele Venturo and the Minister of the Environment Altero Matteoli, all of whom signed a petition of solidarity protesting Spezi’s incarceration.
Posted by Ray Turner at 2:28 AM